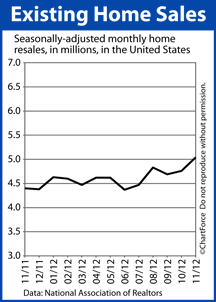 Freddie Mac reported the average 30-year fixed rate mortgage rate at 3.37 percent nationwide for borrowers willing to pay an accompanying 0.7 discount points at closing, plus closing costs — an increase of 0.05 percentage points from the week prior.

The average 15-year fixed rate mortgage rate was listed at 2.65 percent nationwide with an accompanying 0.7 discount points plus a full set of closing costs.

With certain government funding and tax reductions set to expire December 31, legislators appear unlikely to avoid what’s been called the “Fiscal Cliff”. Some economists believe that reaching January 1 with no agreement in place will set the economy in to recession.

Mortgage rates tend to improve on “negative” news for the economy, which partially explains why mortgage rates made a small comeback late in the week.

In other news, according the National Association of REALTORS®, Existing Home Sales reached their highest point since November 2009, climbing to 5.04 million homes sold on a seasonally-adjusted, annualized basis. In addition, the real estate trade group reports that the Existing Home Supply has dropped to 4.8 months — a figure firmly suggesting a “seller’s market”.

Separately, the Commerce Department reported single-family housing starts rising, too; down 4.1 percent in November but up nearly 23 percent as compared to November 2011.

This week, Fiscal Cliff discussions are likely to dominate mortgage markets. The trading week will be holiday-shortened and volume will be lighter-than-normal. This may lead to volatile pricing and rapid interest rate movements.