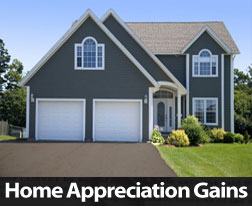 The Federal Housing Finance Agency reported that home prices for sales of homes related to mortgages owned by Fannie Mae and Freddie Mac rose by 5.50 percent year over year.

Sales of new homes dropped by 11.50 percent in September; this was the lowest level since last November. The drop largely attributed to a steeper than usual drop in home sales in the Northeast, which accounted for 62 percent of slumping home prices. Over the past two years, the Northeast region accounted for 32 percent of declining home sales. Low inventories of available homes and rising home prices contributed to the slump in sales; home builders are working to close the gap between available homes and current demand. September’s supply of available homes increased to a 5.80 month supply from August’s reading of a 4.90 percent

Analysts said that September’s inventory of homes for sale reached its highest level in and a half years and also noted that homes under construction had achieved their highest volume in six and a half years. Although millennials are expected to boost home sales as they begin to start families, some analysts pointed out that the slump in sales coincided with indications that third quarter growth may be weaker than economic growth during the second quarter of 2015.