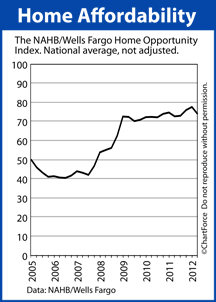 Rising home prices are taking a toll on today’s home buyers. For the first time in 4 quarters — and despite falling mortgage rates — home affordability is sinking.

Earlier this week, the National Association of Home Builders reported the Home Opportunity Index, a measure of home affordability, down to 73.8 for the second quarter of the year. This marks the metric’s first “down” quarter since the second quarter of 2011, and is its lowest reading since December 2010.

A home is considered “affordable” when its payments meet standard mortgage underwriting criteria for families earning the local median income. This definition is used for homes across all U.S. markets — including for homes in Chicago.

73.8% of homes sold last quarter were affordable to households earning the national median income of $65,000. This is the 13th straight quarter dating back to 2009 that the index surpassed 70. Prior to 2009, the Home Opportunity Index had not crossed 70 even one time.

Like all real estate data, home affordability varied by locale.

In the Midwest, for example, affordability was highest. 7 of the top 10 most affordable markets nationwide were spread throughout the nation’s heartland. An Alaskan city took the top spot.

The top 5 most affordable cities for home buyers in Q2 2012 were:

By contrast, the Northeast Region and Southern California remained among the least affordable housing markets nationwide. Led by the New York-White Plains, NY-Wayne, NJ area, 9 of the 10 least affordable areas were in the Mid-Atlantic and California, and for the 17th consecutive quarter the New York metro area was ranked “Least Affordable”.

Just 29.4 percent of homes were affordable to households earning the area’s median income there, down from 31.5 percent three months ago.