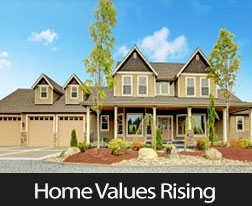 Home prices were still gaining in July, but for 15 of 20 cities included the S&P Case-Shiller 10 and 20-city Home Price Indices, the pace of increasing home prices is slowing down. National home prices rose by 1.80 percent in July as compared to 2.20 percent in June.

Home prices grew by 0.60 percent from June to July on a seasonally-adjusted basis. This was the lowest month-to-month gain since September 2012.

High home prices and unemployment are making it difficult for first-time and moderate income buyers to compete; buyers sitting on the sidelines are eventually expected to add to the demand for homes.

Conditions contributing to the run-up in home prices include a shortage of available homes and pent-up demand among home buyers. As of July, home prices for the Case-Shiller 20-city index increased by 12.40 percent year-over-year; this was the highest annual rate of increase since home prices peaked in 2006.

Las Vegas, Nevada had the highest annual gain in home prices for July with a 28 percent increase. Las Vegas was one of the cities hardest hit by the recession. Annual home prices for San Francisco, California rose by 25 percent, and New York City had the lowest annual growth rate for home prices at 3.50 percent.

The Federal Housing Finance Agency, which oversees Fannie Mae and Freddie Mac, released its home prices report for properties securing mortgage loans owned or backed by Fannie and Freddie. The annual growth rate for home prices was 8.80 percent as of July, but remains 9.60 percent lower than the peak growth rate reported in April 2007.